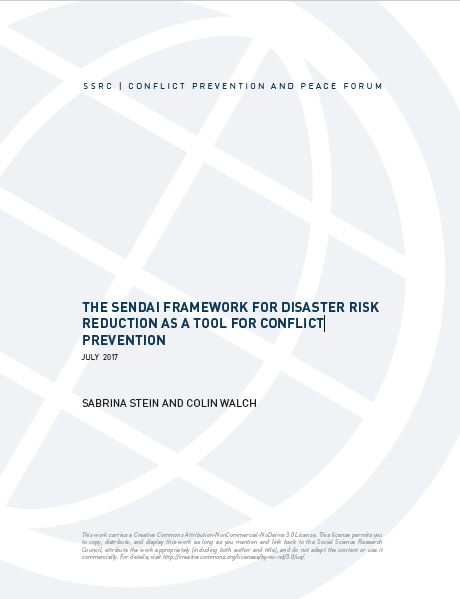 CPPF’s Sabrina Stein and consultant Colin Walch (Uppsala University) produced a paper titled ““The Sendai Framework for Disaster Risk Reduction as a tool for conflict prevention.” The paper examines the conflict-disaster risk nexus and tries to identify parallels between the two agendas, arguing that DRR can be an important tool for the prevention and sustaining peace agendas at the United Nations.

The Sendai Framework for Disaster Risk Reduction (DRR) is a non-legally binding agreement designed to reduce existing levels of risk and prevent emerging risks. While references to conflict were deleted from the final text, Sendai addresses issues parallel to those that would need to be addressed in a prevention and sustaining peace agenda. The Framework, if properly implemented, would tackle three sets of factors that increase both disaster and conflict risks:

1. Socio-economic factors. The Framework aims to reduce vulnerabilities and prevent risks through action that tackles the underlying disaster and conflict risk drivers, such as the consequences of poverty, inequality, and marginalization. The Framework argues for a broader and more people-centered prevention approach to disaster risk reduction and calls for closer engagement with relevant stakeholders.

2. Politico-institutional factors. The Framework highlights the need for good governance in disaster risk reduction at the local, national, regional and global level. By working with national and local actors to help design DRR strategies that prevent the creation of risk and reduce existing ones, Sendai increases economic, social, health and environmental resilience, which is crucial to any prevention and sustaining peace strategy.

3. Environmental factors. The Framework calls for policy planning and preparation that not only considers the impact of climate change but also considers possible scenarios to help anticipate risks and mitigate them. Through a lens of prevention, preparedness, and resilience, the implementation of the Sendai Framework can lower existing climate-related risks.

The Sendai Framework for Disaster Risk Reduction addresses a diversity of factors that put populations at risk of disaster and conflict. Sendai’s focus on inclusive and participatory capacity building at the local, regional, national and global level that involves a diversity of stakeholders mirrors the debate centered on prevention taking place within the broader UN system. Many of the recommendations from the 2015 and 2016 reviews, including the need for system-cohesiveness and inclusion of a diversity of actors, the need for people-centered approaches to prevention, and the primacy of local and national actors in prevention align with the goals delineated within the Sendai Framework.

A prevention-driven United Nations will require creative and innovative solutions that force the system to break away from its bureaucratic and institutional silos. Considering DRR in general and the Sendai Framework specifically as a prevention tool incorporates into the prevention and sustaining peace discussions a sector of the UN that has historically operated independent and in isolation of the work of more prominent UN agencies. For the UN to work horizontally as "one UN" requires bridging these two agendas, as the drivers of conflict sit squarely with the risks of disaster. Multidimensional approaches to prevention that include a DRR lens would address the underlying causes of conflict and disaster-risk. The Sendai Framework sets out a roadmap on how this can be achieved.