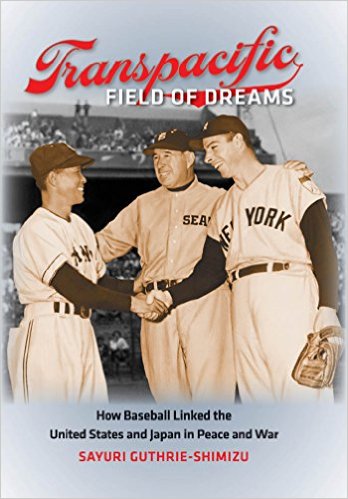 Book written by 2002 Abe Fellow Sayuri Shimizu based on her project "The Evolution of Ocean Resource Management Regimes in the North Pacific, 1930-1977."

Baseball has joined America and Japan, even in times of strife, for over 150 years. After the "opening" of Japan by Commodore Perry, Sayuri Guthrie-Shimizu explains, baseball was introduced there by American employees of the Japanese government tasked with bringing Western knowledge and technology to the country, and Japanese students in the United States soon became avid players. In the early twentieth century, visiting Japanese warships fielded teams that played against American teams, and a Negro League team arranged tours to Japan. By the 1930s, professional baseball was organized in Japan where it continued to be played during and after World War II; it was even played in Japanese American internment camps in the United States during the war.

From early on, Guthrie-Shimizu argues, baseball carried American values to Japan, and by the mid-twentieth century, the sport had become emblematic of Japan's modernization and of America's growing influence in the Pacific world. Guthrie-Shimizu contends that baseball provides unique insight into U.S.-Japanese relations during times of war and peace and, in fact, is central to understanding postwar reconciliation. In telling this often surprising history, Transpacific Field of Dreams shines a light on globalization's unlikely, and at times accidental, participants.