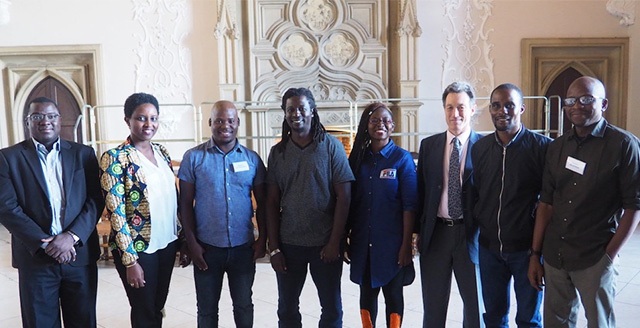 Wilton Park, in collaboration with the Social Science Research Council (SSRC) and the African Leadership Centre (ALC), organized and hosted a conference on “Next generation African peacebuilding: new voices, new networks and new strategies” in Steyning, England, from April 10-12, 2019. The three-day conference was supported by Carnegie Corporation of New York (CCNY).

This conference is the fifth in an annual series on peacebuilding in Africa that started in 2015. Previous events assessed the changing dynamics of conflict and other evolving challenges, the ways in which African peacebuilding actors have been responding to these challenges, how to sustain civil society engagement in peacebuilding, and how to build more effective interaction between African and global peacebuilding.

The SSRC was represented by Ron Kassimir, the Vice President of Programs, along with seven African Peacebuilding Network (APN) and Next Generation Social Sciences in Africa (Next Gen) fellows: Arsene Brice Bado of the Centre for Research and Action for Peace in Ivory Coast (APN 2018); Chantal Ingabire of Community Based Sociotherapy in Rwanda (APN 2017); Edmore Chitukutuku of the Wits University in South Africa (Next Gen 2013; APN 2018); Fredrick Ogenga of Rongo University in Kenya (APN 2014); Toyin Ajao of the African Leadership Centre in Kenya (Next Gen 2017); Admire Mare of the Namibia University of Science and Technology (APN 2013); and Samaila Suleiman of Bayero University, Kano (Next Gen 2012, 2013 and APN 2018).

SSRC’s APN and Next Gen fellows who attended the conference made presentations, chaired sessions, contributed to discussions and networked with some of the world’s leading thinkers, practitioners, and funders in the field of peacebuilding. The theme of the conference was a good fit for their APN and Next Gen-supported projects as scholars based in post-conflict and conflict-affected African countries. The fellows later wrote a short article for the Kujenga Amani blog based on their experience at the conference where they spoke about being able to use their research as a basis “for rethinking methodological, epistemological, and ontological ways of producing and consuming knowledge on peacebuilding in Africa and decolonizing peacebuilding research and practice.” The fellows particularly enjoyed being able to bring their own voices to debate the idea of disrupting dominant narratives of violence and opening up new paths to peace and unity in diversity.

Among the key points made at the conference were the need for peacebuilding to adapt to diverging internal trends on the continent, the failure of the traditional liberal peacebuilding model, and the changing nature and scope of the activities of newly assertive external state actors in Africa. Participants at the conference also discussed the challenges facing peacebuilding networks with respect to sustainability, relevance and effective leadership, the lack of support for and recognition of networks led by youth and women, and the importance of new online media sources and the need to incorporate new technologies and media in peacebuilding strategies. Among others, it was observed that Next Generation peacebuilding in Africa requires bringing together the extensive knowledge and experience of youth organizations, women’s networks, community groups, and nonviolent movements. Participants at the conference were also of the view that peacebuilding in Africa should be contextual and cautioned against one-size-fits-all approaches that fall short of addressing the diverse challenges facing the continent.